It’s a brand new season, and in our first episode we’re introducing our new co-host (Chris Enns), new on-air producer (John Robertson), and new format. That’s right, the wait is almost over: Because Money Season Three, plus all 38 episodes from Seasons One and Two, are going to be available on iTunes soon thanks to our new off-air producer MuhammadYasir Dewji.

In this episode we talk about what’s been happening since last we met (did you know there was an opera about Alexander Graham Bell?), we play a hysterical few rounds of The Newly-Hosted Game like the nerds we are, and talk about how this season came to be, which means we’re replaying a few deep conversations about money and meaning that set the tone for the themes we want to discuss this season.

Plus, we introduce what we’re calling The Unnamed Segment (catchy, right?): our nod to the fact that there’s an insane amount of good stuff out there on the internet that deserves to be shared.

Chris wants you to listen to: Bad With Money With Gaby Dunn 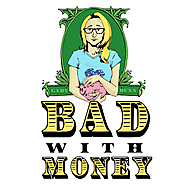 You know those money podcasts where financial experts teach you practical steps for maximizing your income? "Bad With Money" is the opposite of that.

Sandi wants you to read: A Philanthropist Tells Us How Growing Up Rich Can Feel Isolating (and Giving Opens Doors)

Iris Brilliant, 28, a member of the charity network Resource Generation, describes her journey to becoming a philanthropist.

John wants you to read: Michael James on Money

A blog about personal finance, investing, and money.

Hey, are you guys interested in the transcripts? We’re turning on the comments section for this episode so you can tell us if you care about reading transcripts (like Sandi) or not (like Jackson).

Copyright © 2023 Because Money. All Rights Reserved.